When you book with an account, you will be able to track your payment status, track the confirmation and you can also rate the tour after you finished the tour.
Sign Up
8066

Why Visapur should be your next trekking destination this monsoon?

Visapur Fort is larger and at a higher elevation than its twin fort- Lohagad. Within the fort are caves, cisterns of water, a decorated arch and old houses. These two roofless buildings are surrounded by outer or veranda walls are said to have once been Government offices. The ruins of a large stone-built house are known as the Peshwa’s palace. In addition to a huge carving of Hanuman, there are also several temples dedicated to him scattered all over the place. Hanuman (or Maruti) was likely the patron deity of Visapur fort.

There is a well that local legend says was built by the Pandavas. In 1885, near the north wall there was an iron gun ten feet long and of the four-inch bore, marked with the Tudor Rose and Crown, flanked by the letters E. R. This is probably a gun of Queen Elizabeth’s reign probably taken as bounty from an English ship and presented to the Peshwa by Kanhoji Angre or some other commander of the Maratha navy. Like other guns on the fort, it has been disabled by breaking off its trunnions. Close to it are the remains of an old Mahadev shrine.

Visapur fort was build by the first Peshwa of Maratha Empire Balaji Vishwanath in 1713 to protect the wealth and treasuries of Maratha empire.  This later stole by British and only the remnants left there now. During the war betwen British, Visapur fort is attached and destroyed much by their cannons. You will still see water reservoirs, canals, caves, gilded cove inside Visapur fort.  Later many travelers started trekking to this location and Visapur starts getting its visitors almost every season. Monsoon is the best time to do trekking here due to its absolute green surroundings and various water streams on the way.

What is the detailed itinerary of Visapur monsoon trek?

Our monsoon trek to Visapur starts at 5 am from SNGC Borivali, We expect our fellow trekkers to reach the location on time. By 5.15 we will start our journey towards the base village in a private vehicle. We are having some pick up points from where also you can get inside the vehicle. The following are the pick up points:

By 10 am we will have a short introduction about the trek and start our hike towards the top. it is going to be a 3 hour long trek towards the Visapur fort. we will take required break between to make sure that less experienced ones also feel it comfortable. We are expecting to reach the top by 1 pm and enjoy the serene view of nature and clouds. lets have some quality time at Visapur fort , makes some good friends, take pics.

What is the difficulty level of Monsoon trek to Visapur fort?

Is it safe for solo and female travelers?

What is the height of Visapur fort?

1082 feet above sea level. it will take 2.5 to 3 hours to reach the top of Visapur fort.  During the monsoon season the whole area will be absolutely greenish with excellent surrounding views

What is Visapur monsoon trek is famous for?

The Visapur fort situated at an altitude of 1084 feet from sea level surrounded by lush green nature and clouds during monsoon season makes it best time to trek.  The Visapur fort is made up of rocks and a small Shiva and hanuman temple is also major atttractions of visapur trek.

which is the best time to visit Visapur?

Mid June to September during the monsoon season is the best time. You will be able to see various water streams, lush green surroundings which gives an excellent view from the top.

Washrooms are available during the Visapur trek?

No. Washrooms are only available at the base village

Can i smoke during the trek?

can i listen to music while trekking?

No. Listening to music via speaker, headset or Bluetooth devices are not allowed during the trek. Please listen to the chilling breeze and nature instead 🙂

How to reach Visapur Fort?

What is the temperature of Visapur during Monsoon? 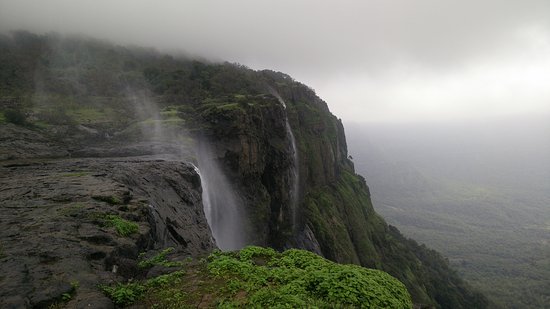